India is the largest democratic country in the world, the people of India elect their representatives every five years by participating in the Assembly / Lok Sabha elections. For the Chunavri process, the Election Commission of India is the apex and powerful body that conducts the elections. The electoral process has become much easier due to the use of electronic voting machines (EVMs) for this election process.

The Parliament of India has 2 Houses: Lok Sabha and Rajya Sabha. Lok Sabha: Members of the Lok Sabha elect the Prime Minister of the country.

A person completing adult suffrage becomes eligible to vote in accordance with Article 326 of the Constitution. An adult can participate in the voting process upon meeting other eligibility conditions set by the Election Commission. Earlier, the age was 21, but in 1989 it was reduced to 18. A person who is not a citizen of India or is barred from voting by law for engaging in misdeeds, cannot participate in the voting process. Once a citizen enrolls as a voter, the Election Commission of India also issues a unique number of identity cards for the voter. With the order of the Supreme Court, the ECI has given the option of NOTA (none of the above) to every person willing to participate in the voting, when he realizes that no candidate is entitled to be elected.

For the federal model, the areas for election at each level are divided into definite parts by the Delimitation Commission of India. These parts of the areas for Lok Sabha / Rajya Sabha / State Legislative Assemblies are called 'Constitution'. Whereas in case of Municipal Corporations / Panchayats, these parts are called ‘wards’. A representative is elected by the people of this region. To vote, a person must enter their name in the voter list. Many candidates participate in elections, which may be from either a political party or an independent candidate. After filing nomination, a candidate has to get approval from the Election Commission for his electoral programs. Candidates for election campaign and election stop 48 hours before the election. With the entire process administered by the Election Commission of India and it announces the election results on the scheduled dates.

India has adopted a multi-party political system. A political party is formed by politicians on the basis of ideology and to achieve political goals. A party gets the status of a 'national' or 'state' party after meeting the criteria of the Election Commission. There are eight national parties in India. They are All India Indian National Congress (INC), Bharatiya Janata Party (BJP), Trinamool Congress (AIDMK), Bahujan Samaj Party (BSP), Communist Party of India (CPI), Communist Party of India Marxist (CPIM), Nationalist Congress Party (NCP) , National People's Party (NPP). There are 55 state parties and about 2500 unrecognized parties in India. 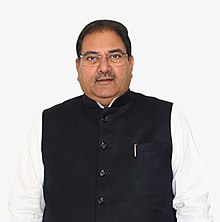